#1
I've been reading nothing but good about this pistol since it came out. Brownell's has them in stock in both black, as well as Stainless Steel. It's not hard Chrome plated like the FN Browning's, but rather a full Stainless Steel pistol. As you know Browning has discontinued the Hi-Power. So this Turkish clone by Tisas is the only one of it's kind in current production in Stainless Steel. (They also offer a model in black Cerakote for slightly less).

It arrived yesterday at my FFL, and I immediately drove over to pick it up. This is a beautiful gun! Especially for it's modest price of only $569.00. (Brownell's charged a $10.00 handling fee, and my FFL charged $30.00 for the transfer). So the grand total was $609.00 to get it from Brownell's to my kitchen table. Not too bad for a Stainless Steel Hi-Power.

Overall I'm very impressed. The machining and workmanship is impeccable. Very few tool marks on the inside of the slide and frame, and a nice slide to frame fit. The overall fit and finish on the pistol is beautiful! The gun field stripped very easily. It comes with 2, 13 round, polished blue Mec-Gar magazines. They interchanged with all of the other magazines I have for my other 2 Hi-Powers.

I gave everything a good cleaning and oiling. Except for the slide rails, which I greased with Weapon Shield Lithium Grease. It went back together without a hitch. I'm hoping to get it out to the range next week, assuming everything dries out. (It's been raining cats and dogs here for the last several days).

I ordered the Tisas BR9 Hi-Power Essential Reliability Kit from BH Springs Solutions. It gives you an extra extractor, and firing pin face plate. The kit also contains new springs and various roll pins required for installation. It's a good kit with quality parts that's nice to have on hand. I intend to shoot the hell out of this thing, so having a few extra parts for it in stock can't hurt. They could also come in handy for my other 2 Hi-Powers, should any small parts go south. Some of the very early production models of these guns had some issues with extractor breakage. But those were supposedly corrected, and these newer models are good to go.

If any of you guys are wanting a Hi-Power, but waited too long, and don't want to pay the high prices being asked for the used one's, don't be afraid to grab one of these. Quite honestly, for the price, I just don't see how you can go wrong. If this thing shoots half as good as it looks, I'll be a happy camper. Here are a few quick and dirty phone pics. 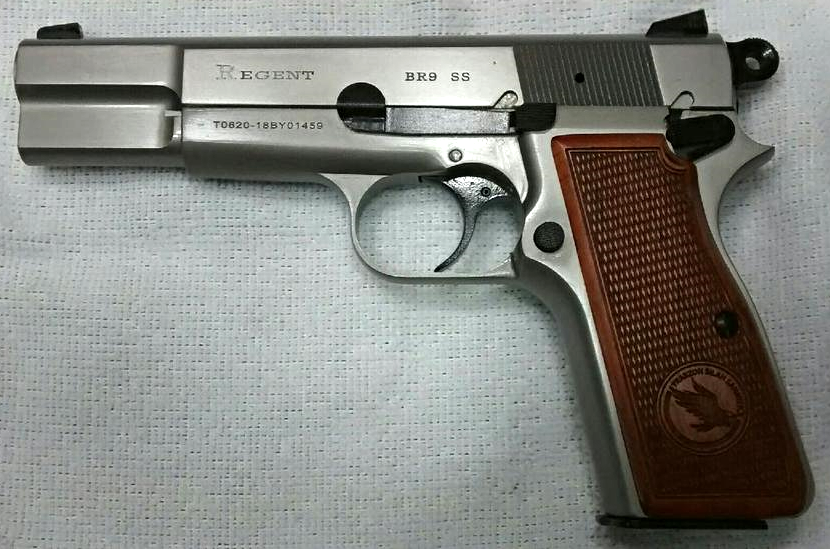 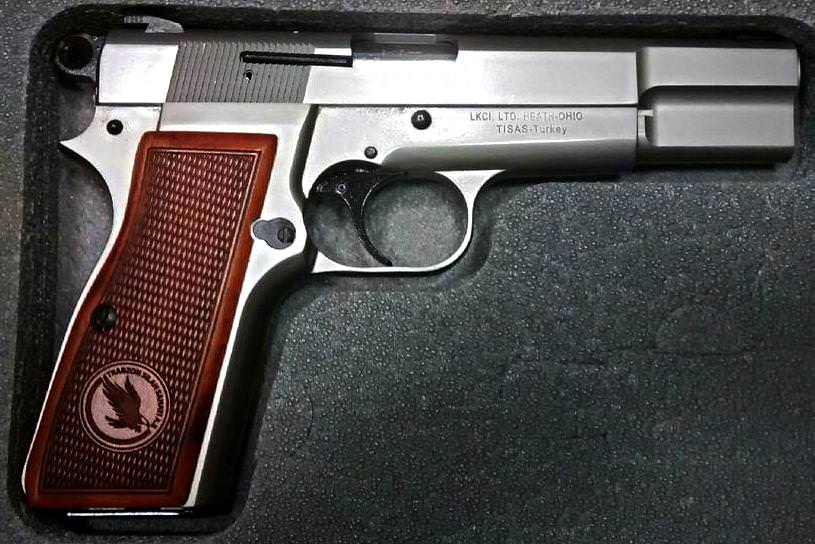 #2
I am a huge fan of the HP, mine is probably my favorite handgun. That being said I wish they have added some updates on the design, mainly thicker metal on the front strap with some sort of texturing or checkering. Would love to see a premium model at some point with that, maybe a beaver tail and dare I say it, possibly a light rail.

Have to say the sights are a nice upgrade.

Forum Supporter
2020 Supporter
Commercial Sponsor
#3
A lot of quality arms are coming out of Turkey these days.

#4
I know a lot of people think of clones as a foreign, cheapened up version of the real McCoy. And in many cases that is true. But in this case I can honestly say this new Tisas displays every bit as good of machining quality as any Browning Hi-Power I've come across. And that includes both of my 75th Anniversary Browning Hi-Power pistols.

The Tisas has fewer tool and machining marks on the inside of both the frame and slide. The barrel lugs fit perfectly into the cuts in the top of the slide, with all but non existent play. It's definitely a first rate pistol. Naturally the proof is always in the shooting, and that remains to be seen. But I have to say right now I have nothing but confidence that this pistol will perform every bit as good as it looks. The barrel is beautifully polished to an all but mirror finish inside and out.

While it does lack checkering on both the front and rear strap of the grip frame, I can understand why it was eliminated as a cost saving measure. And if these pistols sell well, I don't doubt that an enhanced model will make an appearance in the Tisas line up before too long. Here is a promotional video showing the Tisas plant. It is as clean and modern as any machine shop in the states I've ever been inside, in the last 45 years.

#5
billt said:
While it does lack checkering on both the front and rear strap of the grip frame, I can understand why it was eliminated as a cost saving measure. And if these pistols sell well, I don't doubt that an enhanced model will make an appearance in the Tisas line up before too long. Here is a promotional video showing the Tisas plant. It is as clean and modern as any machine shop in the states I've ever been inside, in the last 45 years.
Click to expand...
Hi Powers have never had checkering because the front strap metal is too thin. Would be a nice fix though. You're right though the Tisas factory looks top notch.

I got to the range early this morning with the new Stainless Tisas Regent, and gave it a good workout with a total of 400 rounds of various ammunition fed through no less than 6 different magazines. I am happy to report the pistol performed flawlessly. Not a single FTF or FTE, or any type of hiccup of any kind!

The magazines were all filled to capacity, and all fed flawlessly in the pistol, regardless of the type of ammunition they contained. With the exception of the Phosphate coated Browning magazines with the spring assist, they did not drop free when released. But all were very easily removed from the pistol when empty. All 6 magazines locked the slide back when the last round was fired.

All 400 rounds cycled the pistol perfectly. 4 magazines, (2, 13 round Browning's, and 2, 13 round Mec-Gar's), were shot rapid fire as fast as the trigger could be pulled. "Mag dumps", if you will. This was with the Federal 9BPLE, and was done to test rapid fire functioning. All 4 magazines fed perfectly. The brass was ejected cleanly and about 6 to 7 feet to the right, and 3 feet to the rear, in a nice neat 3 to 4 foot circle. I examined the cases as I gathered them and returned them to the box, and none showed any signs if denting or damage. I would call the extractor on this gun perfect. No problems with it what so ever.

All shooting was done at 25 yards. The sights were adjusted perfectly, printing dead center with a 6 O'clock hold. The gun was warm, but was allowed a substantial amount of time to cool as all 6 magazines were reloaded. The trigger was slightly gritty for the first 100 rounds or so. But it smoothed out nicely as the shooting progressed. And after the last box of ammo went through the gun, it was breaking cleanly and very crisp after a minimum amount of take up.

Overall I couldn't be more pleased with this pistol. It ran with 100% reliability for 400 rounds. With a good variety of different types of 9 MM ammunition. As you can tell from the picture, the gun got quite filthy after 400 rounds. But after a field stripping, and a good cleaning in Kerosene, followed by a good blow drying and re lubrication, it was as clean as when removed from the box.

I'm going to pick up another one of these pistols. I just don't think for the price you can beat them. They are well made, reliable, accurate, and very nice looking pistols. And with Browning ending Hi-Power production, these are as nice of a clone as you're likely to come across.

#7
Excellent write up. I have been considering these since I first heard about them. Thanks for helping me decide. This will be my next pistol purchase.

#8
While I can't report first hand, I've heard from several owners of the black Cerakoted Tisas Regent's, they have experienced chipping and flaking of the finish. I chose the Stainless Steel model because no one else makes a Hi-Power clone in Stainless Steel. It would appear to be worth the slight additional cost. Just something to consider if you are in the market for one of these pistols.

Forum Supporter
2019 Supporter
2020 Supporter
#9
I avoid hot ammo in my Hi Power..Something about cracking frames?...I know that I've read something, but I don't remember the particulars. The .40s are beefed up to prevent that.
Wouldn't know if your clone would be susceptible.

#10
Almost 2 years later, how has the pistol been working out for you?

#11
So far, so good. I most likely have another 1,500 rounds through it since I started this thread. And the gun has functioned quite well. I know that's not too high of a round count. But last year at this time we sold our home, and were in the process of moving to Lake Havasu City, Arizona, from the Glendale, (Phoenix) area. So it's been a busy year to say the least. And I didn't get in as much shooting as I would have liked as a direct result.

But now that we're fully moved in, and most all of the projects have been completed, as soon as it starts cooling off this Fall, I'll be back at it, and the Regent will be seeing more ammunition, to be sure....... Unless this COVID nonsense rears it's ugly head again, and shuts down our local gun club here in Havasu. They have closed the shotgun ranges twice now because of it. But I'm hoping by this Fall it will go away. Thankfully the handgun and rifle ranges have remained open.
You must log in or register to reply here.
Share: Facebook Twitter Google+ Reddit Pinterest Tumblr WhatsApp Email Link